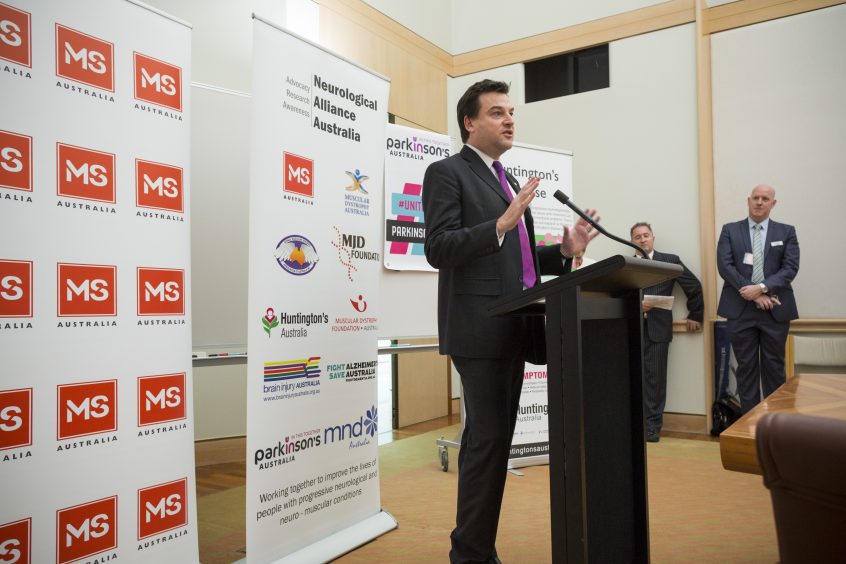 In a Joint Position Paper released in Canberra on March 22nd, the ten national peak bodies of the Neurological Alliance Australia (NAA) – including Brain Injury Australia – called on the National Disability Insurance Scheme (NDIS) to better meet the needs of the 850,000 Australians living with progressive neurological or neuromuscular conditions that have no known cause, and no cure.

Download People with Progressive Neurodegenerative Diseases in the NDIS, here.

Established in 2010, the NAA is an alliance of not-for-profit peak national organisations representing of the 850,000 Australians living with progressive neurological or neuromuscular conditions that have no known cause and no cure. This group includes adults and children, carers, families, friends and workmates, whose life has been affected by a progressive neurological condition.

Neurodegenerative brain diseases cause abnormal changes to brain cells and usually have a clinical pattern that can be diagnosed. These diseases increasingly disrupt brain function as the disease progresses. Common examples are, Multiple Sclerosis, Huntington’s disease, Parkinson’s disease, Motor Neurone disease and Alzheimer’s disease. These brain injuries are different from those caused by trauma, stroke, hypoxia, in that the brain injury will get progressively worse as the disease progresses. Read more on BIA’s website here.

The NAA believes that the NDIS can transform the lives of people living with progressive neurodegenerative diseases, and has promoted and supported the NDIS since its inception. To date, some NDIS participants have received individual funding plans that have had positive, life-changing impacts on their lives; however, many others have received insufficient plans that will adversely affect their quality of life and place some at risk of avoidable hospitalisation.

To ensure the best outcomes for people with progressive neurodegenerative diseases under the NDIS, the NAA recommends:

The Media Release of the Position Paper is here.