Simon is a successful businessman in his 50’s who sustained a work-related severe brain injury in 2010. He is fully mobile and living alone. Simon has severe aphasia as a result of his injuries. This results in significant difficulty in finding the words he wants to say; he is often reliant on spelling and gesture to help convey his meaning. He is also prone to shift to irrelevant topics and can provide excessively long responses. He is greatly assisted by familiar communication partners who are able to support his communication. 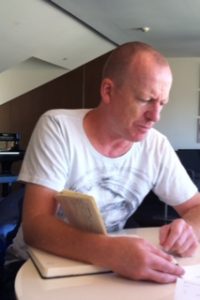 In recent months he was required to attend a court hearing after an incident in his former workplace. He was prepared for the hearing by his rehabilitation team who were given support to attend and brief his legal team. Several concessions were requested prior to the hearing to accommodate his brain injury. Many of these were not permissible (such as, quiet room for preparations, access to written and spoken information, provision for a private hearing, provision of a trained communication partner to assist with proceedings).

Simon’s experience of the process, however, was greatly aided by the additional time provided by his barrister and magistrate in all communications before and during the hearing. Instructions were repeated and simplified in a respectful manner. Some latitude was given for Simon’s interjections, and his therapy team were called on to translate and support the court process. There was a significant precedent in how the outcome was determined (in terms of provisions under the Mental Health Act) and of critical importance was the stipulation that his rehabilitation team and trained communication partners were viewed as integral to supporting the court orders.

Simon was both pleased with the outcome and the concessions made to accommodate his communication deficits, as the following interview reveals:

Earlier this year you were arrested. How did you find talking to the police?

Very very hard. Because it was about 1am and I was at home. I didn’t know and she got me and went in front of everyone (gestures handcuffs). And I said but I’ve got a dog (gestures that the dog needed to be looked after). And they took me on my own and I was brrr (gestures cold) because I just had my things on (gestures to shorts).

And did the officers understand about your communication problem?

Not at all. They were like 23 or 24 and they didn’t have a clue about aphasia.

Did anyone help you explain – did you show them your aphasia card?

No – but the next morning a friend came and he said it was disgusting – but now it had to go to Court, and the police said this is all terrible but we have to do it. And for everyone with aphasia they can understand and I thought it was just weird.

And when you had to go to Court who helped you get ready?

Well it had to be a barrister. Now the amazing thing is that he didn’t know everything exactly to do with aphasia and he’s trying the best that we could. It’s like he doesn’t care about the aphasia but we are going to try and stop this Court. I think he has done very well with it all.

Did you get to meet first?

Not really. He just worked with it.

How did the barrister talk to you?

And did he explain things slowly – could you follow?

Absolutely. Most of it – or I would ask. We would justAphasia information card stop right there and we would talk about it. He did listen but I think at the start he did not think about speech and aphasia.

And who was in the court with you?

There was me, the Barrister, my Case Manager and my Speech Therapist. And the other side.

Did the Magistrate talk to you?

Yes to myself. I thought she was very good. Because I think she said don’t worry about this, it’s hard now. I think she tried to talk – but it was strange, and it should not be done. I think that she understood in the Court and she was fantastic on aphasia – it was done very well. What I would like to do is that I believe some people want to know about aphasia. Some people try to work and realise it is hard.

And what has been the hardest thing about your brain injury?

It’s disgusting. I know you last year you said it is hard (with friends) but I thought – no, no, I will be OK. But now I’ve got Friday, Saturday, Sunday with no-one cares me. I didn’t understand that happened.

So what does help you cope?

I have to do work downstairs (renovating) – I did it myself. There are certain things, like dinner etc – I understand and I can do it myself. I actually do it here and it’s not horrible! And music, piano – I should do more. And I think it’s about making it for everyone – not strange? People can’t understand it and it’s just strange.

This interview was conducted with the assistance of Simon’s Speech Pathologist. For more information on Aphasia go to www.aphasia.org.au