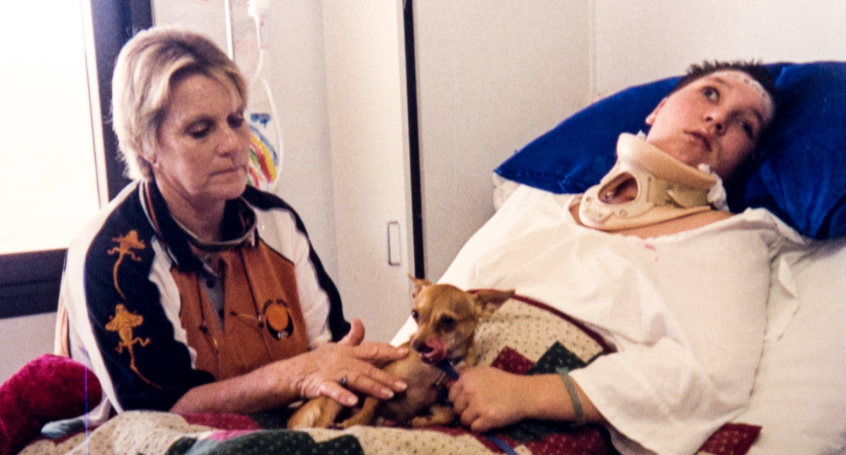 Have you ever ridden a horse? Did you wear a hard protective helmet? The debate about whether to use a hard hat or not often receives a passionate and mixed reception in the Northern Territory. Often old stockmen are dead against it, but increasingly the large corporate beef companies are making them mandatory in employment contracts. Most outback sports clubs also require hard hats to be used in novice competition.

Awareness and attitudes in the Northern Territory, have certainly come a long way in just four years, and that’s where a special story about the recovery of Quita Docking, from a debilitating camp drafting accident, begins.

Read the beginning of this personal story…

The ride was fantastic. Quita and two other ladies rode all the way and two of the men took it in turns to ride and drive the trucks. We had a rough start with one of the horses being a stallion and Brumby being the only mare. She went skittish and Quita was very nervous about riding her. She was racing around, bucking, calling out, etc. and we were most upset and angry. All the work that Quita and Tracy had done earlier in the year to get her ready was thrown out the window just by the presence of a stallion. We got Kevin to ride her often and his wife Karen rode her as well. These two were very competent and Kevin had a way with horses and was able to calm Brumby down so that Quita was able to ride her. As a matter of fact, Brumby was extremely well behaved whenever anyone was riding her. She played up something fierce at night and on one night; we know the stallion got to her, but not too sure if he was able to fully mount her. When we got home, we gave her a needle to abort any fetus that may have been there. Quita rode Brumby most of the time, although we got Kevin or Karen to ride her for the first couple of km at the beginning of the day to make sure she was settled. She was fine. So well behaved, especially when Quita was on her back.

Listen to the rest of the story here.