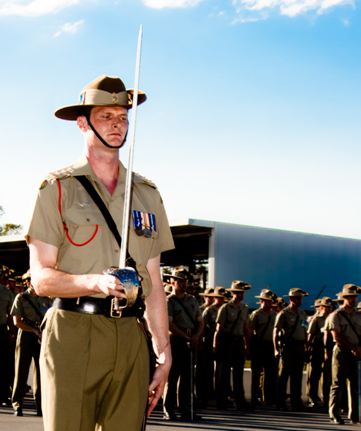 Ed Bennett’s promotion to Major in the Australian Army – 2009

“In September 2013, I received a phone call from my husband, Ed, who was on active duty with the Australian Army in Afghanistan. Ed was responsible for planning the relief in place of 20,000 Australian Defence Force personnel within Regional Command South as well as the drawdown of forces within the area. He was calling to say, don’t worry, that he was okay but he had collapsed that morning, knocking himself out and had had seven staples put in his head. At the time, he had had a CT scan [Computerized Tomography scan – a series of cross-sectional X-ray images used to examine bones and soft tissues for damage or abnormalities] of his brain, which showed no bleed, so he was diagnosed with a concussion rather than a traumatic brain injury. He did fail initial cognitive testing, but the focus was on getting him back to Australia at the end of his tour one week later. 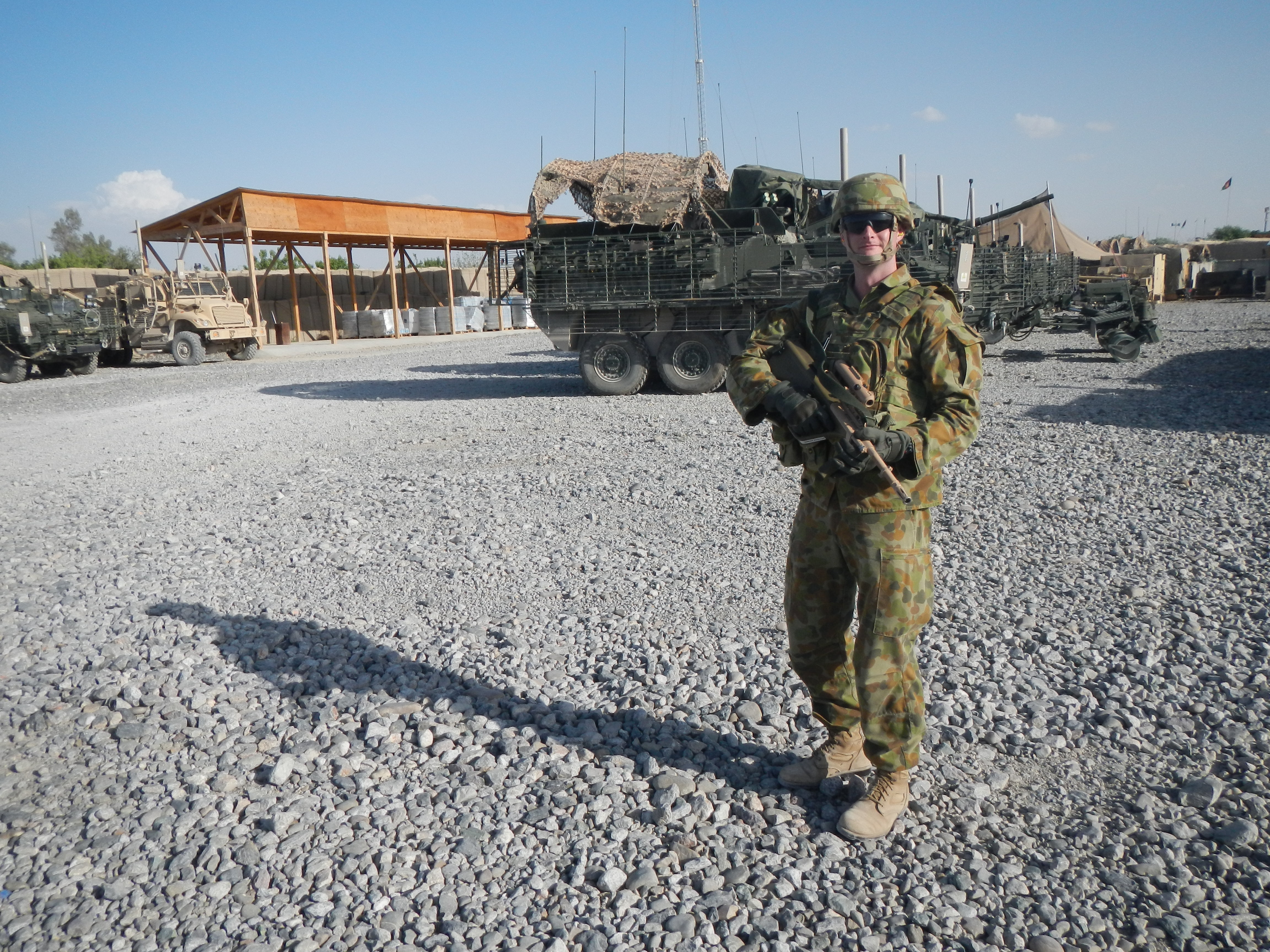 Ed Bennett on duty in Afghanistan with the Australian Army – 2013

He was confined to barracks for that final week and medevaced back to Brisbane. He recalls having significant balance issues, dizziness, problems speaking and extreme fatigue. After the flight from Kandahar in Afghanistan to Dubai he couldn’t get out of bed for two days. Then, we flew from Dubai to Brisbane via Darwin and Sydney. (It’s of interest that we have since read an article from the American military stating their concerns about air travel following brain injury. They are investigating if the change in air pressure during take-off/landing and altered oxygen levels on board might hamper recovery from traumatic brain injury, TBI.)

Once back in Brisbane, investigations commenced, namely: neurocognitive testing from a neuropsychologist; and with a neurologist; and with a cardiologist to find out why he had collapsed in the first place, as well as regular check-ups with his General Practitioner (GP). The initial verdict was that he had suffered a severe concussion and, after a two-week rest, should be back to normal. After two weeks he was still no better – with memory issues, confusion, fatigue, word-finding difficulties, irritability etc. – and his GP said that’s okay; sometimes concussions take four weeks to recover from.

At four weeks, we were told it might take two months. By this stage, Ed had already had an unsuccessful attempt at return to work, and the neurocognitive testing had come back showing definite and significant cognitive damage. Ed was referred for ongoing neuropsychological reviews to learn strategies to aid his recovery. Unfortunately, the Australian Army didn’t have a neuropsychologist on its referral system, so initially Ed was referred to a psychologist who was based in a major shopping centre and advertised herself as a relationships specialist, and diabetes educator. The shopping centre was a 30-minute drive away. By this stage, we had identified that Ed could not drive unfamiliar routes, long distances, and could not cope with the sensory overload of shopping centres. Hence, our first battle with the army commenced trying to get recognition of the need for specialists in brain injury specialists to treat his injury. This request to see a brain injury neuropsychologist took four months, his first active rehabilitation commencing in January 2014.

Soon after, the Army sent Ed to their own Occupational Therapist, who formally tested Ed’s balance and other cognitive functions. He was the first military medical officer to use the term “TBI” instead of “concussion”. His management plan was to give Ed a further six months off work in order to recover from his TBI. During this time tests of his heart function had come back clear. Ed had also started seeing a psychiatrist and was diagnosed with an adjustment disorder [a psychological response to stress involving marked distress and significant impairment in functioning, where the onset is linked to an identifiable stressor]. Although the term “TBI” was now being used, Ed had still not seen anyone regularly other than psychologist and psychiatrists to assist with recovery.

After ten months, when Ed was still unable to return to work. He was told by his GP that he should be better by now and it was suggested that it was a mental health problem affecting his recovery. He was advised to try anti-depressants.

By this stage I was becoming very frustrated with Ed’s management.

Ed with his wife Lou, and two children, Charlotte and Tim,
following Ed’s promotion to the rank of Major – 2009

I had identified so many cognitive problems and functional problems that were typical of brain injury. I requested a change of GP. Our new GP arranged repeat MRIs [Magnetic Resonance Imaging – a medical imaging procedure that uses a magnetic field and radio waves to investigate or diagnose conditions that affect soft tissue such as tumours or brain disorders] and neurocognitive testing, as well as a second opinion from both a neurologist and psychiatrist. When all the results came back with identical diagnosis of TBI and adjustment disorder, Ed finally had the recognition and management required, 10 months post-injury!

Over the next six months, Ed was saw: a speech therapist; an occupational therapist (one for home functional assessment and one for driving assessment); a social worker provided by Queensland’s Acquired Brain Injury Outreach Service (ABIOS); a psychiatrist; a neurologist, who ordered an electroencephalogram (EEG) – which measures the electrical activity of the brain] – to assess Ed for epilepsy); a neuropsychologist; an occupational physician; a physiotherapist (for ongoing neck pain); a vestibular physiotherapist; hearing tests organised by the speech therapist; and a neuro- ophthalmologist.

Although Ed made some good improvements with rehabilitation focused on his TBI, after 18 months his recovery had reached a plateau. It was identified that he would not be able to return to work. The road towards medical discharge commenced. During this time Ed’s mental health suffered immensely due to his adjustment disorder with anxiety and depression. We had one trip to an Army hospital, as he had a bad reaction to Endep [an antidepressant with pain-relieving properties] which he was placed on to treat vestibular migraine. He became suicidal on Endep and was told by his psychiatrist to never take any antidepressant medication as it had too much of a negative effect on his cognitive function.

Ed was discharged from the army 4th February 2016. 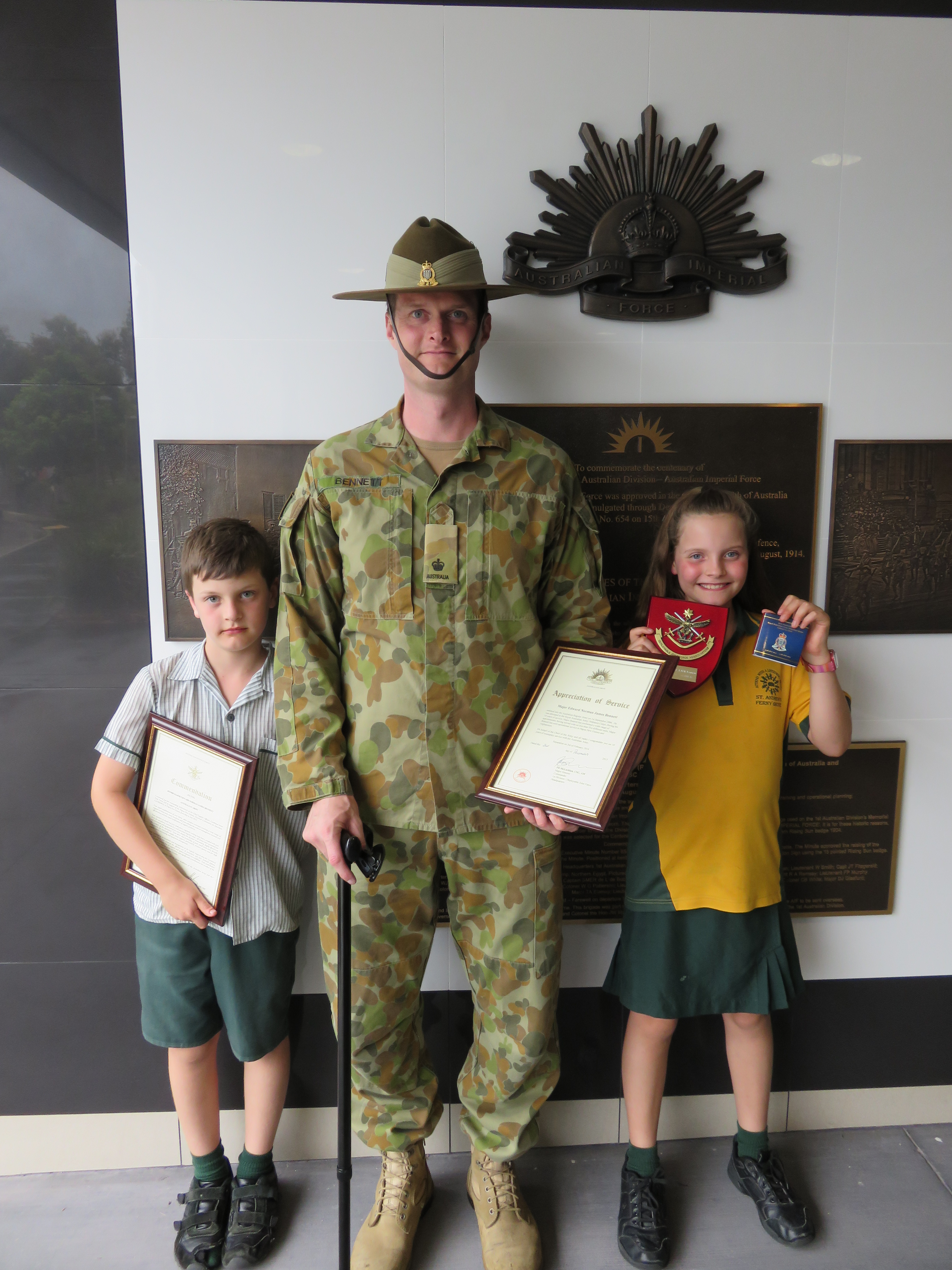 Ed with Tim and Charlotte, following Ed’s discharge from the Australian Army – 2016 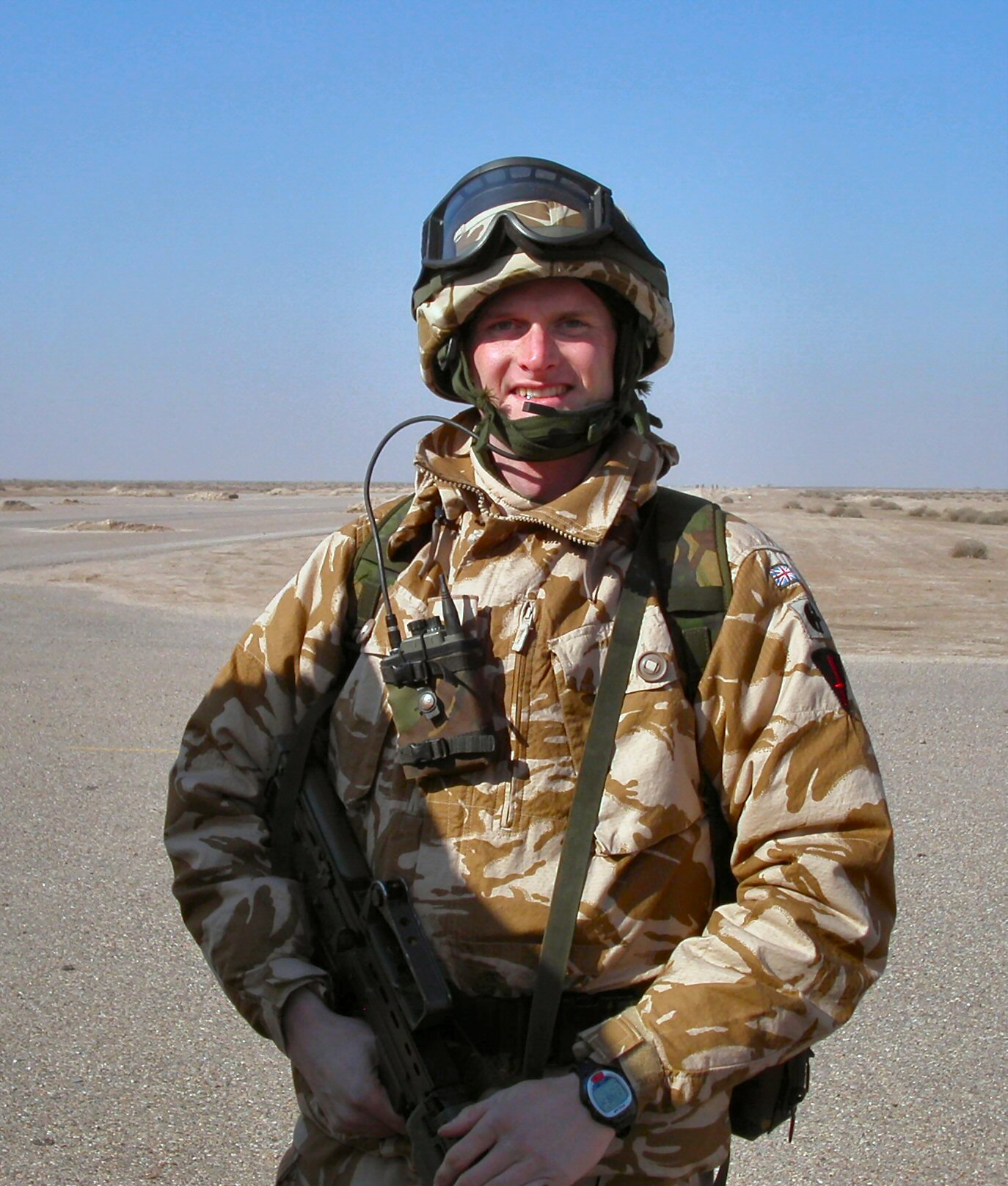 The next ten months was spent waiting on an assessment by the Commonwealth Superannuation Corporation for disability payments and Department of Veteran Affairs (DVA) for permanent impairment review. This time was immensely stressful on all the family. Having no guaranteed financial future, Ed’s mental health and inability to trust a system that had already let him down was devastating. Fortunately, the system worked. By August 2016, Ed’s permanent impairment was finalised and he was given a class A disability payment.

Throughout this process the effect on me and our two children has been immense. I had to change work to find hours and stability that would give the family some financial security. Unfortunately, I was unable to work full-time, due to the impact my absence had on the children and Ed. It became obvious in the early days that Ed was unable to look after the children for more than a couple of hours. The children started to show signs of anxiety (Charlotte) and uncontrolled anger (Tim).

The support for our family has come predominantly from Mates4Mates (initially we tried to access counselling via Veterans and Veterans Families Counselling Service, but we were told they could not see the children individually, just as part of family counselling). We have also been blessed to have ongoing support from ABIOS, Legacy and Whiskey’s Wish.

Fast forward nearly four years post-injury, and we have finally started to find our “new normal”. 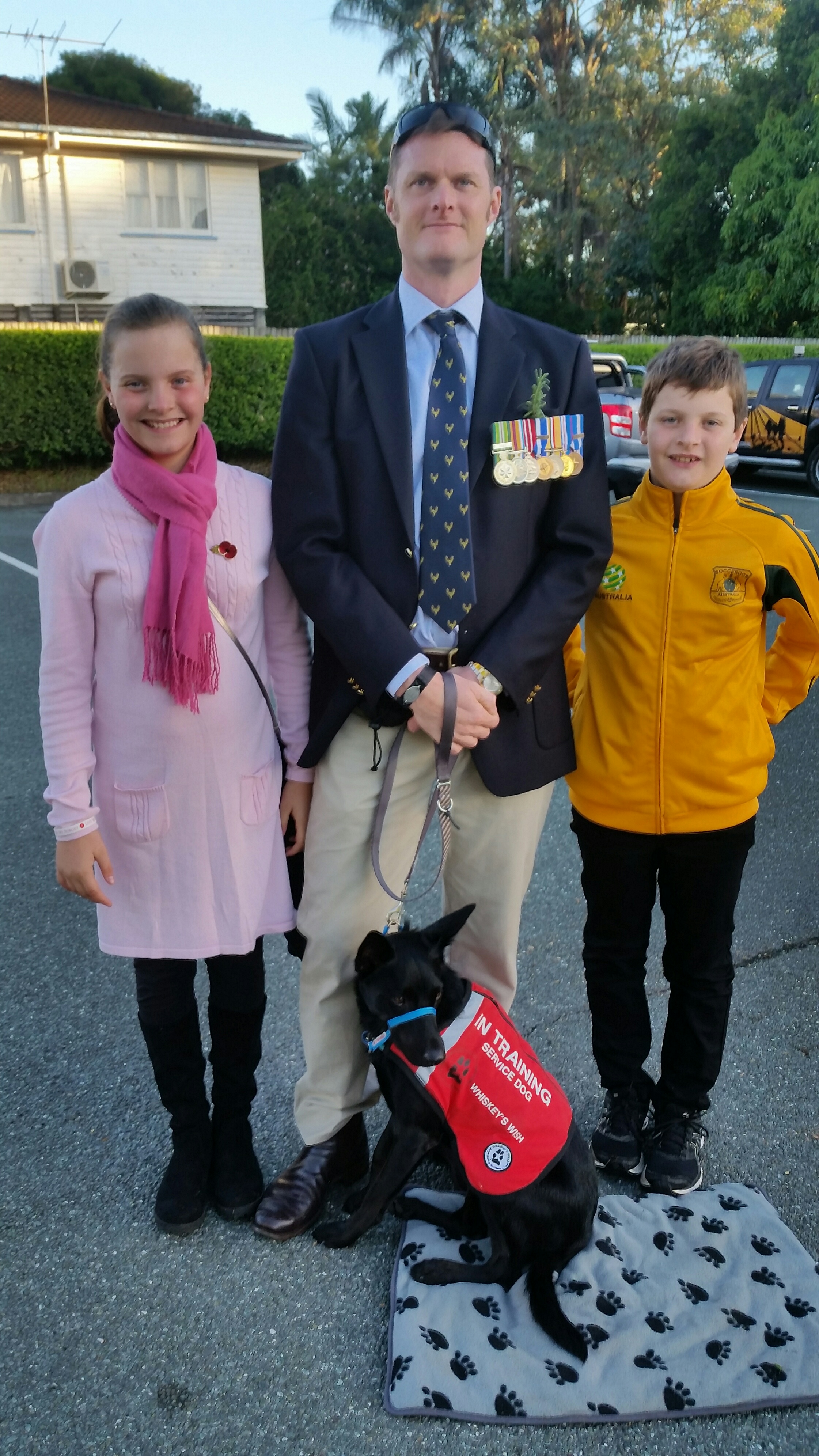 This has involved moving to a disability-friendly house, adjusting our lifestyle around Ed’s fatigue levels and avoidance of sensory overload. One year ago, on the advice of our occupational therapist, we got Ed an assistance dog. This has had a very positive impact on Ed’s ability to function and leave the house independently.

Ed and I are both now 43, Charlotte is now 11 and Tim 9. Flash is our assistance dog; we also have another dog, Bailey, and a cat, Percy. 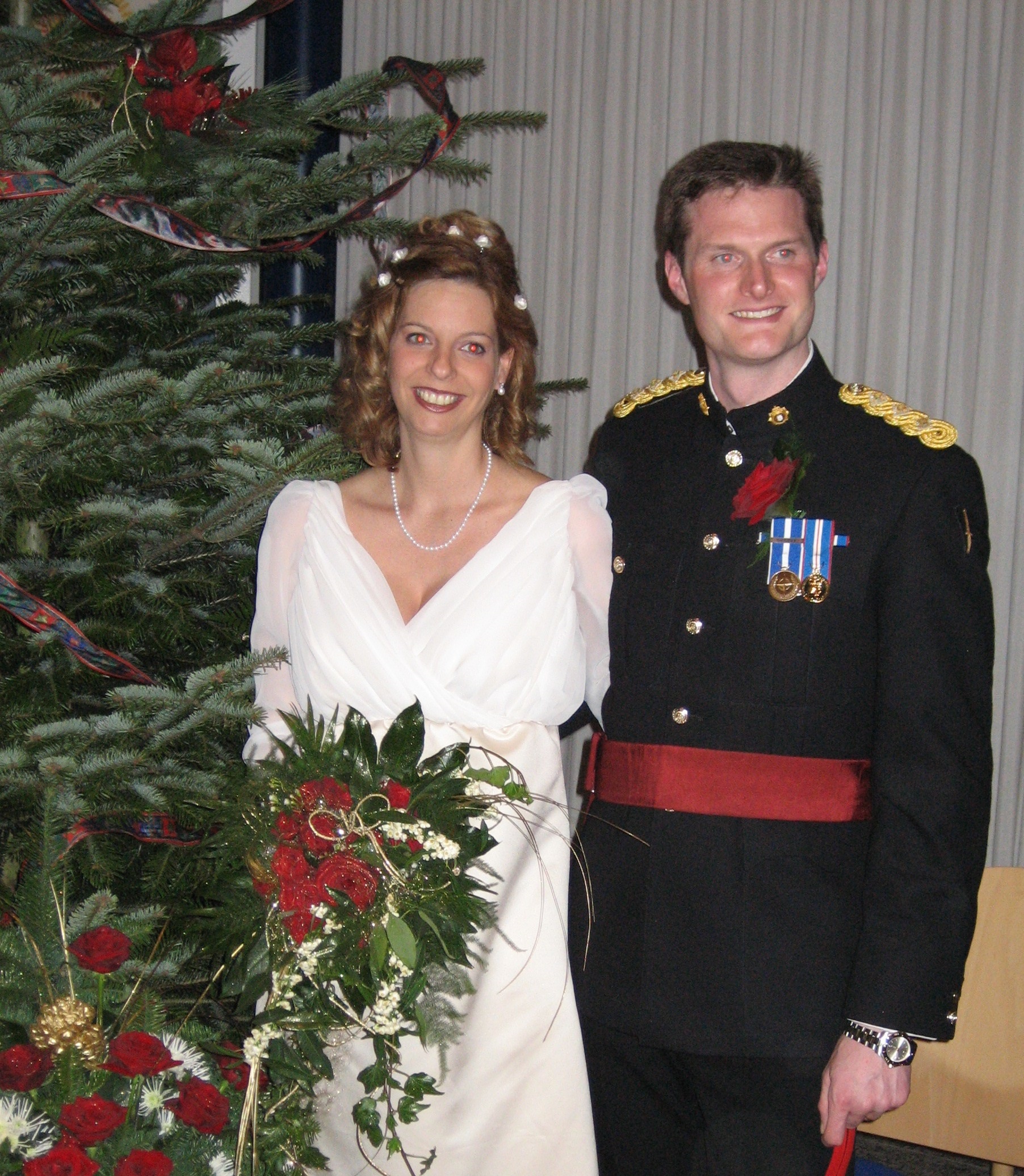